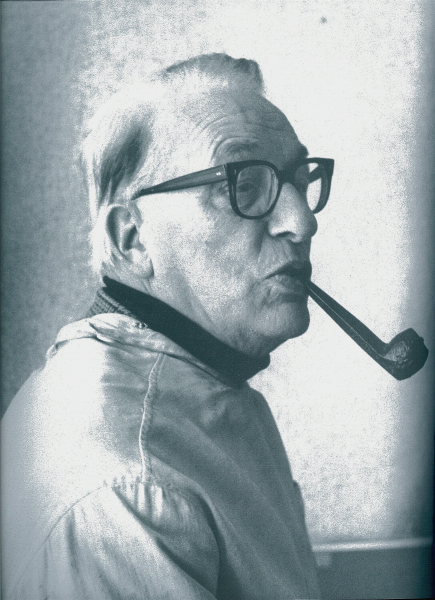 Mario Deluigi was born in Treviso in 1901 and moved to Venice as a teenage with his family. Despite his vocation for music, he attended the art school where he found his life friend Carlo Scarpa. In 1926 he enrolled in the Academy of Fine Arts, first a pupil of Ettore Tito and later of Virgilio Guidi. In this year he met Gino Severini and in 1927 it was his first Parisian stay. In 1928 he participated in the XIX Collective of the Opera Bevilacqua La Masa and two years later at the Venice Biennale, where he returned seven times, in particular in 1962 with a personal room set up by Scarpa. He was present at the Rome Quadrennial in 1959 and 1972. He devoted himself intensely to teaching, in Venice at the Academy of Fine Arts, at the Free School of Plastic Arts, at the IUAV and at the Institute of Art, and in Salzburg. He is a friend of poets, musicians, such as Maderna and Nono, the exceptional gallery owner Carlo Cardazzo, architects, as well as Scarpa, LeCorbusier , and Wright and the art historian Giuseppe Mazzariol . In 1951 he joined the spatialist movement of Lucio Fontana. He participates to the last, with other Venetian exponents such as Bacci, Gaspari and Morandis , in the exhibitions of the group supported by Cardazzo. His research led him to the grattage , exhibited for the first time at the Venice Biennale in 1954. He died in Venice in 1978.