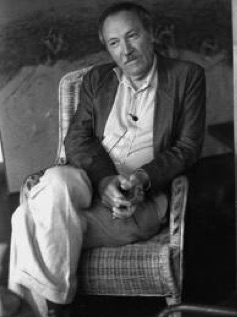 Anton Zoran Mušič was born into a Slovenian-speaking family in a village near Gorizia, now Slovenian territory. After completing his studies at the Academy of Art in Zagreb in 1934, he began his career with long trips, to Madrid, Maribor, Ljubljana before settling in Trieste and Venice, where he married Ida Barbarigo Cadorin who considered for all his life his only inspiring muse. In November 1944, during the Second World War, he was deported to Dachau , where he managed to secretly portray the life of the camp in extremely difficult and dangerous circumstances. After the liberation, which took place in 1945, he returned to Venice, where he won the Gualino prize at the 1950 Biennale. A new phase of his painting evolves around the representation of Dalmatian landscapes of his youth. In the 1950s he spent some time working in Paris, studying French “lyrical abstraction”, before returning to his Venetian studio. A new series of works, dated between 1970 and 1976, entitled “We are not the last”, in which the artist transforms the terror and hell of captivity in the concentration camp of Dachau into documents of a universal tragedy, it has enormous success and is certainly the most critically acclaimed. Zoran Mušič’s production is honored in numerous international exhibitions, and to this day his works are kept in the most important museums in the world, mainly in Italy, Slovenia, France, Spain, Germany and the United States.