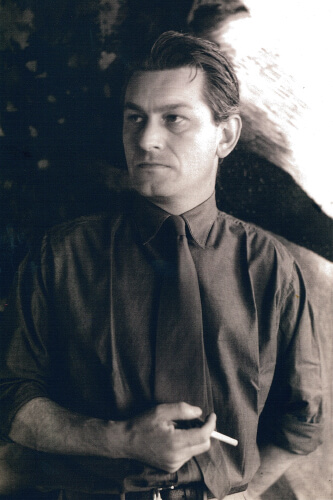 Gino Morandis studied at the Academy of Fine Arts in Venice under the guidance of Virgilio Guidi, who he followed at the Academy of Bologna. There he has the opportunity to also attend the lessons of Giorgio Morandi, thus enriching Guidi’s teachings on light with a particular attention to the emotional value of tonal color. He began exhibiting at a very young age by participating in the Collective Exhibition of the Opera Bevilacqua La Masa in Venice in 1932. Returning to the lagoon after the war, he participated in the cultural debate of the city and established a privileged relationship with Emilio Vedova, while moving away from figurative painting to direct his research towards abstract expressions. In the early fifties he joined the spatialist movement and came in contact with the gallery owner Carlo Cardazzo. It was he in 1962 who suggested the addition of an enclitic “s” to the surname, to distinguish himself from Giorgio Morandi. The art of Morandis in these years assumes a particular role within the spatialist movement; his particular coloristic sensitivity, which is accompanied by a decisive formal vocation, leads him to develop a language of pure fantastic abstraction suitable for expressing the imaginary universe of personal introspective research. He participates in numerous and important national and international artistic events, including the Venice Biennials of 1936, 1948, 1950, 1952, 1954, 1956, 1958, 1958, 1962, 1968 and the Quadrennials of Rome in 1935, 1951, 1955, 1959, 1959, 1972. In recent years, the increase in interest, both public and critical, for his works has been reflected in important public, collective and personal exhibitions.