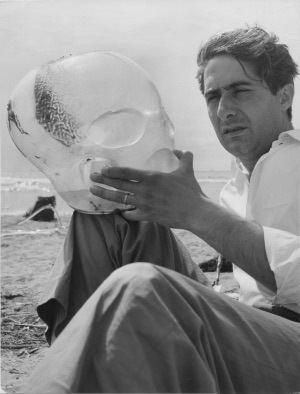 Vinicio Vianello was born in Venice in 1923, was formed between Verona, Milan and Padua. From 1941 he began exhibiting in the group shows of the Opera Bevilacqua La Masa, which in 1946 assigned him an atelier at Palazzo Carminati. In 1948 he participated in the Venice Biennale. Of these years are his first contacts with the glass art. In 1951 he obtained the Gold Medal at the IX Triennale of Milan, in 1957 he obtained the Grand Prix always at the Triennale and, at the same time, the Compasso d’Oro della Rinascente. In 1951 he joined the first group of Venetians, Ambrosini, Deluigiand Guidi, of the Spatialist Movement, and signs the fourth Spatial Manifesto. He differentiates himself from the Venetian spatialists for his open research between painting, glass, ceramic, engraving, and for experimenting with ever new materials and techniques. He is a guest of international events such as the Venice Biennale, in which he takes part in numerous editions both for painting and for glass and ceramics. In these years he exhibited in Italian art galleries and abroad. Artist researcher, he remains the studies for the exploitation of alternative energy sources and his role as co-founder of the Design course for industrial designers and craftsmen at the Veneto Institute for Work, with Giulio Carlo Argan, Carlo is very important Scarpa and Franco Albini. He died in 1999.