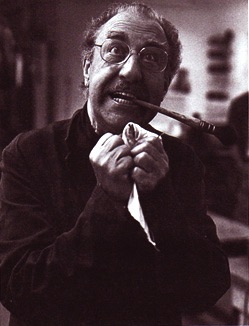 Giuseppe Santomaso was born in Venice in 1907. He trained at the Bevilacqua La Masa Foundation and the Academy of Fine Arts. In 1934 he participated in the XIX Venice Biennale. His personal exhibition was in 1939 in Paris, at the Galerie Rive Gauche. In 1943 he was at the Quadrennial of National Art in Rome and, three years later, in 1946, he was among the founders of the New Italian Artistic Secession which then became the new Front of the arts. In 1948 he exhibited in Stockholm with Afro and Birolli . He began his constant participation in the Venice Biennale. At the 1954 Biennale he won the International Prize for painting. In 1952 he was part of the Group of Eight, the abstract-concretes by Lionello Venturi, which included Afro, Birolli , Corpora,Moreni , Morlotti , Turcato and Vedova. He exhibited at Documenta di Kassel in 1955, in 1959 and in 1964. In 1975 the first Raisonné Catalog of his painting and that of graphic work in Rome came out in Venice. In 1980 it was the anthology of Munich and in 1982 the anthology of Venice. He died in Venice in 1990. The Reasoned Catalog is released in 2017.