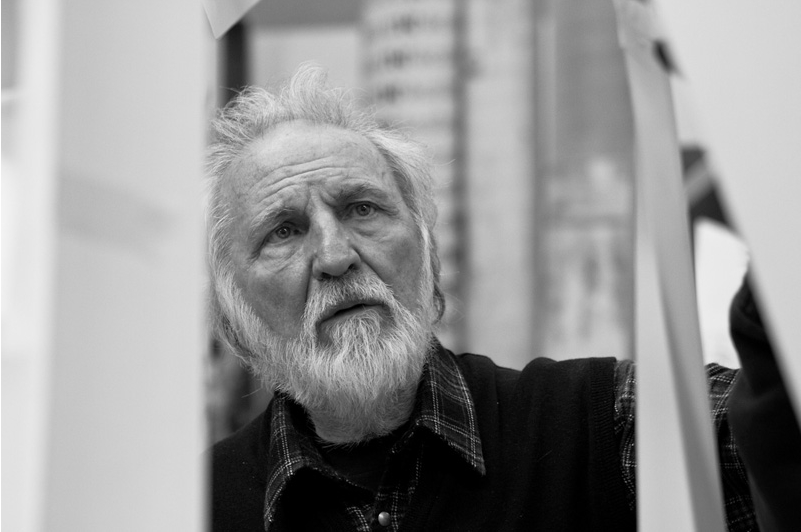 Giorgio Celiberti was born in Udine in 1929. He began painting at a very young age and barely nineteen took part in the 1948 Venice Biennale, the first after the war.
In Venice he attended the art school and then the study of Emilio Vedova. In the lagoon city he shares the study room with Tancredi. In the early fifties he moved to Paris, where he came into contact with the major representatives of the figurative culture from across the Alps. Thus began a series of journeys that will remain fundamental for his training. The return to Udine, in the mid-sixties, allowed him to start a reflection on himself, which still lasts, full of creative results always characterized by a devouring anxiety of experimentation. Since the sixties he has dedicated himself specifically to sculpture, although his creative activity is characterized, with increasing emphasis, by an original symbiosis between plastic and pictorial expression. He has participated in the most significant art events in Italy and abroad: at the Venice Biennale, the Rome Quadrennial, the Esso Prize, the Burano Prize, Marzotto, Michetti, La Spezia, San Marino, Autostrada del Sole, at the International Fiorino Prize, at the exhibition of New Italian Painting in Japan. Over a hundred personal exhibitions. In 1991 two prestigious public works were created: the Friendship Mosaic in the atrium of the University of Ljubljana and the fresco covering over 800 square meters on the vault of the Kawajyu hotel in Shirahama , Japan. Lives and works in Udine.