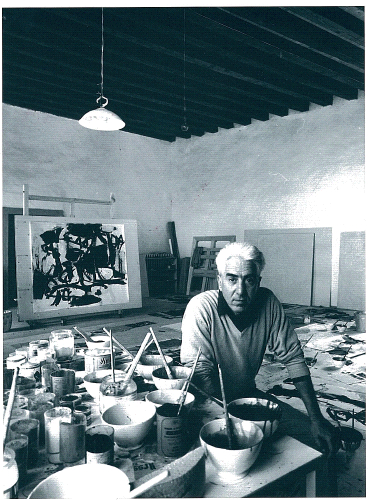 Afro Libio Basaldella was born in Udine in 1912. In 1928, at the age of sixteen, he exhibited together with his brothers Dino and Mirko at the first and only Exhibition of the Friulian Avant-garde School. In 1930, thanks to a scholarship, Afro had the opportunity to travel to Rome and get in touch with the artistic environment of the capital, where he then moved permanently. In 1935 he took part in the Quadriennale, and in 1936 in the Biennale; where he also exhibited in 1940 and 1942. After the experience of the Roman School, the creation of various works of mural painting and the temporary approach to Neocubism, in 1950 Afro went to the United States and began his twenty-year collaboration with the Catherine Viviano Gallery. In 1952 he joined the group of Eight, with whom he took part in the XXVI Biennale. In 1955 he attended the first edition of Documenta in Kassel, the Quadrennial and the traveling exhibition in the USA “The New Decade: 22 European Painters and Sculptors “. Reaches acclaim and fame above all internationally and in 1956 he was awarded the prize for best Italian painter at the Venice Biennale. In 1958 he took part, together with Appel, Arp , Calder , Matta, Miro, Moore, Picasso and Tamayo , to the decoration of the new headquarters of the UNESCO building in Paris by painting “The Garden of Hope”. The years 1959-60 saw him intensely engaged internationally: he was invited to II. He documents in Kassel, and is the winner of the first prize at the Carnegie Triennial in Pittsburgh and the prize for Italy at the Solomon R. Guggenheim in New York. After the death of his brother Mirko, which occurred in 1969, he underwent various health events. The seventies are characterized by the intensification of the graphic work and by a thinning of the pictorial and exhibition activity. He died in Zurich in 1976.